As always, there have been many improvements in the latest update to OpenMapTiles, with the most significant changes found in the transportation layer this time. The update also has new data you can add to the map, changes to what is available to see at each zoom level, and improvements to almost every layer.

You can find a complete list of changes in the GitHub release notes here: Release v3.13.

If you want to get started with OpenMapTiles then MapTiler provide cloud and self hosting solutions:

The key enhancements to this layer have been the addition of several new tags that help differentiate roads. These changes enable you to represent the data better, particularly when showing routes.

Expressways are mainly used in the USA, with some examples in the United Kingdom and France. Highlighting these routes often shows the fastest connections, which are not always the large multi-lane roads. 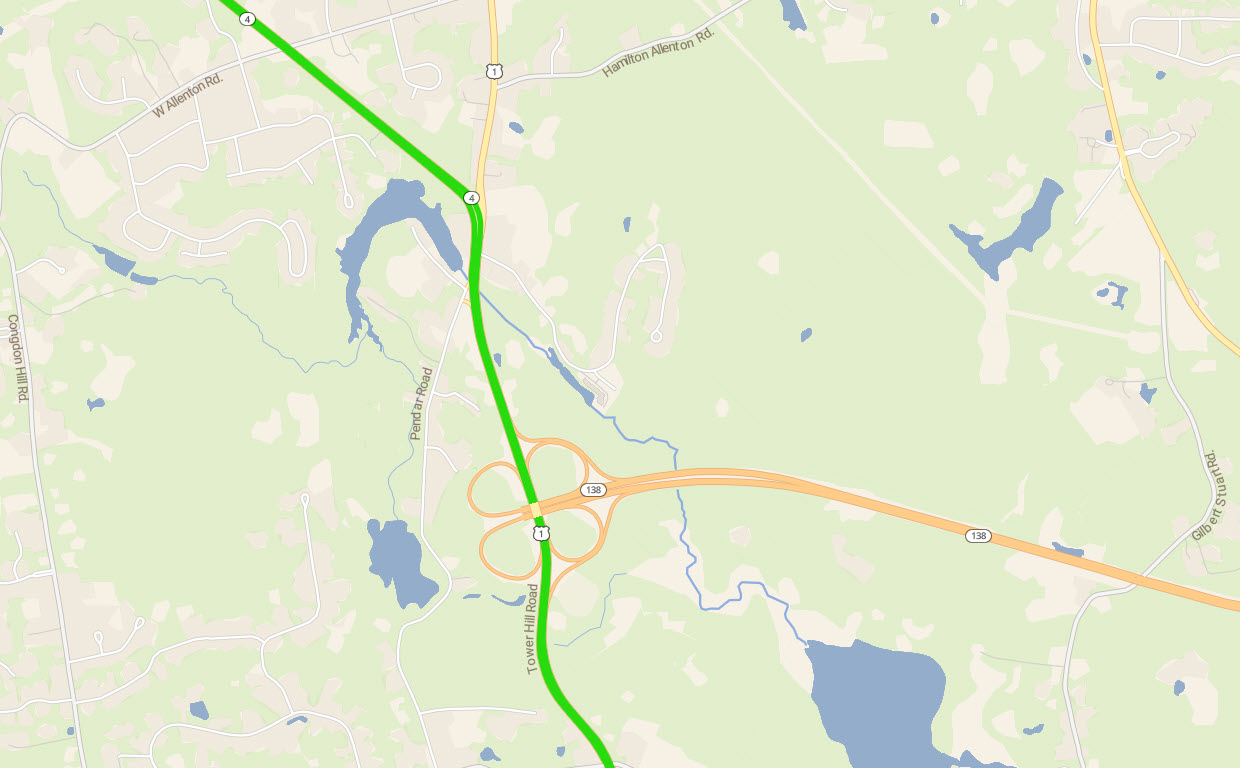 An expressway is highlighted in green, with other major roads in yellow and motorways in orange. 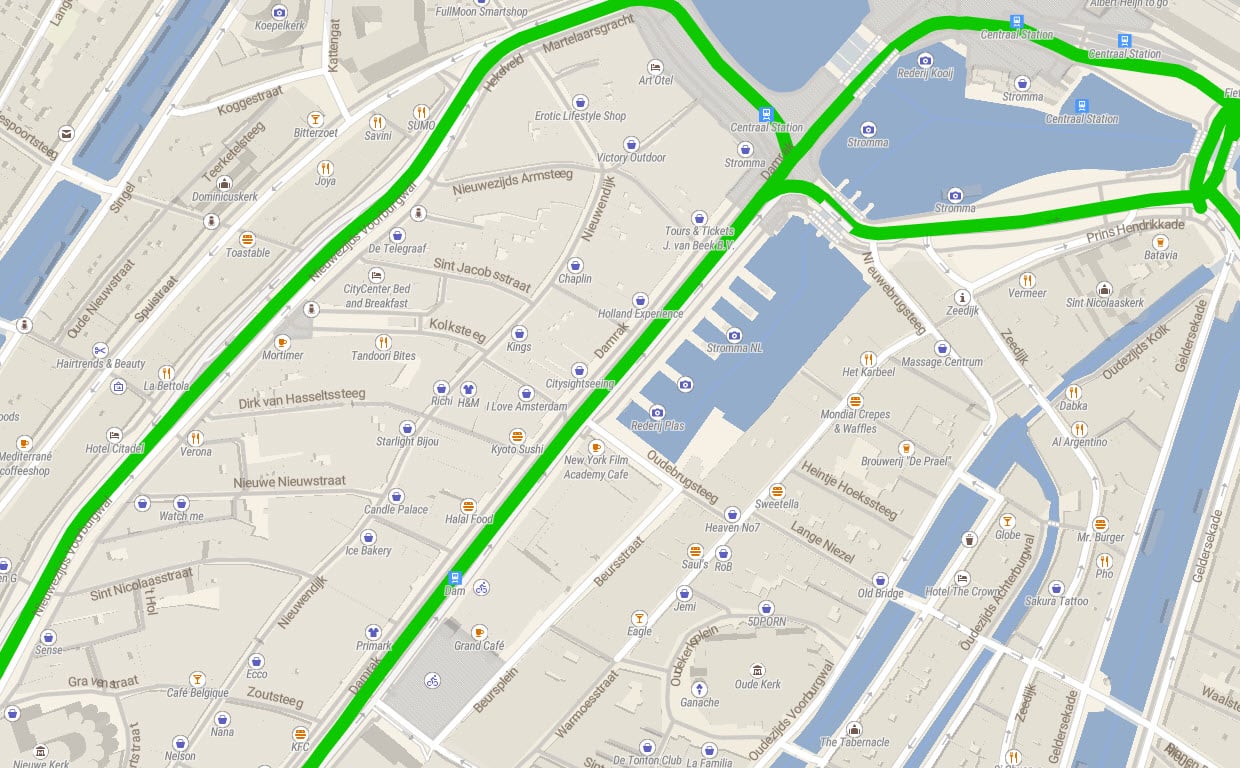 Busways in Amsterdam highlighted in green.

You can now highlight paid motorways on your maps by using this tag. This information is important to show on the map, particularly if you have specified alternative routes that don’t include tolls. Showing toll roads enables users to see why they are not recommended routes in this scenario. 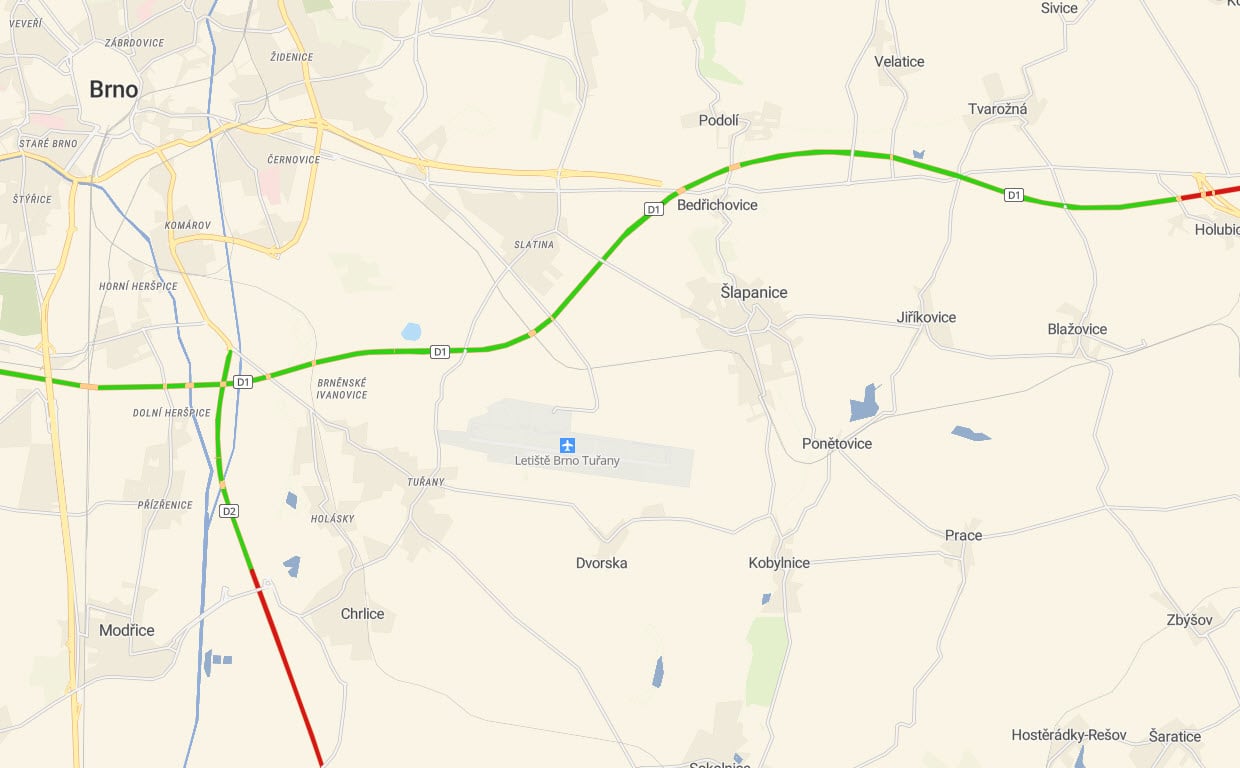 A map highlighting motorways, those in green don’t have tolls and those in red require a toll to be paid for use.

Access is a new tag that you can use to define who can use a road. This tag enables you to style private roads with no public access differently from others. Access=no in the vector tiles from OpenMapTiles uses both the access=no and access=private from OpenStreetMap. 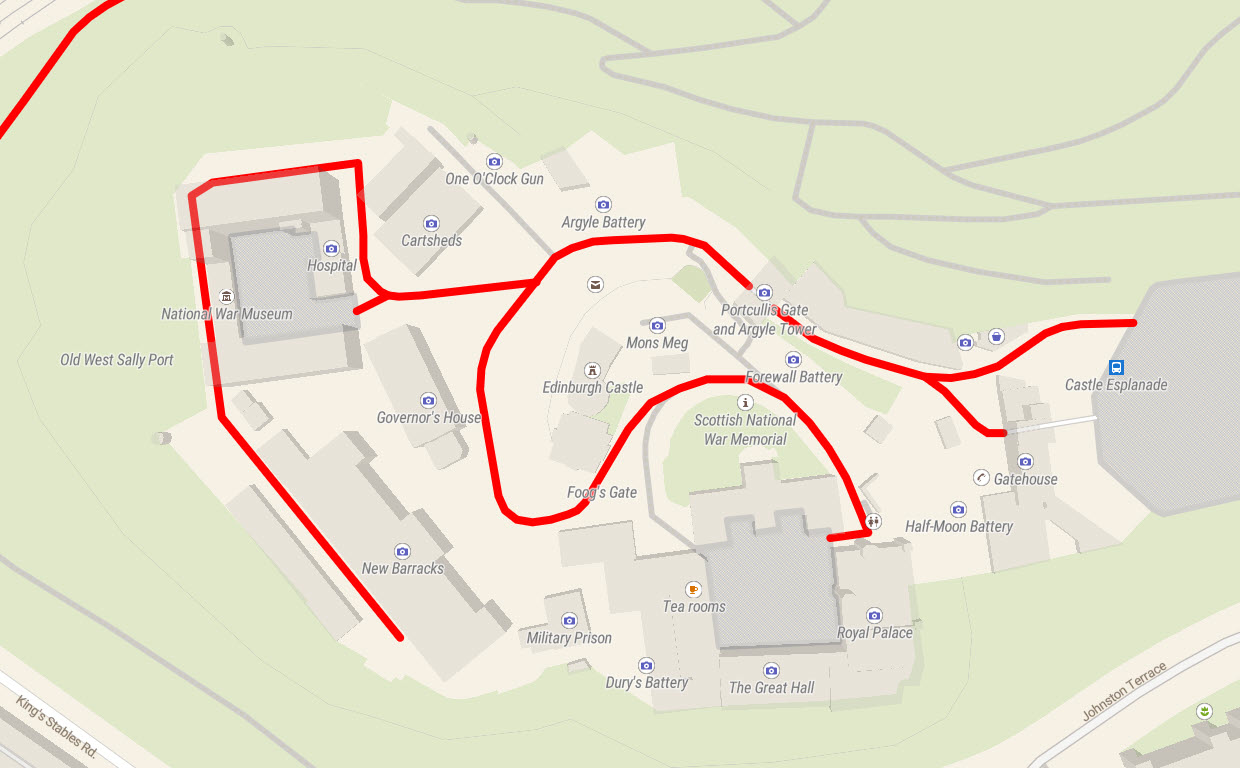 The private roads around Edinburgh Castle are shown highlighted in red.

The network tag is now available in the transportation layer, not just in the transportation_name, to help improve the styling of roads in different places. This change means that you can create different styles for roads in the same category, such as us-interstate and gb-motorway. This feature is great for making maps with roads styled differently to match their national mapping agency’s color scheme, for example. 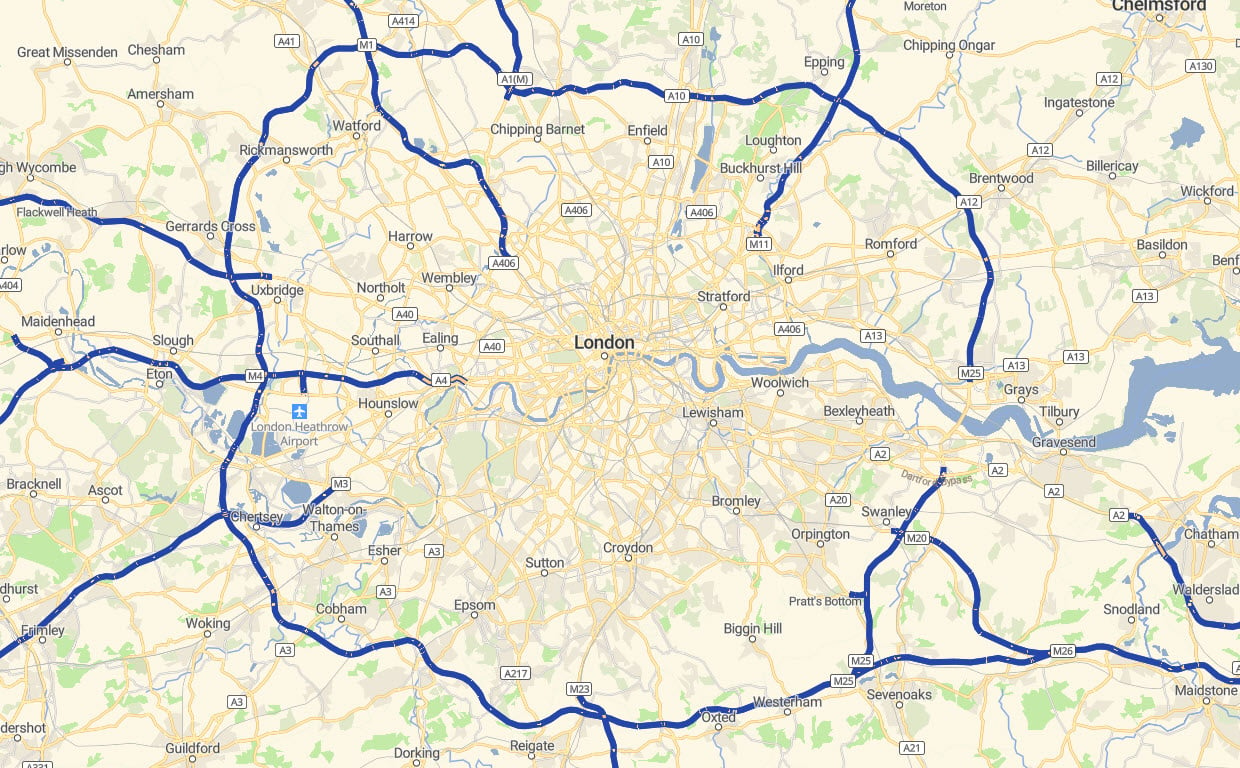 The motorways in the UK have been styled differently from those in other countries. Here they are shown in blue which the National Mapping agency, Ordnance Survey, uses.

Many roads have two independent labels, for example, Interstate road I40 and the historic Route 66. This enhancement allows you to use both pieces of information on a single map. 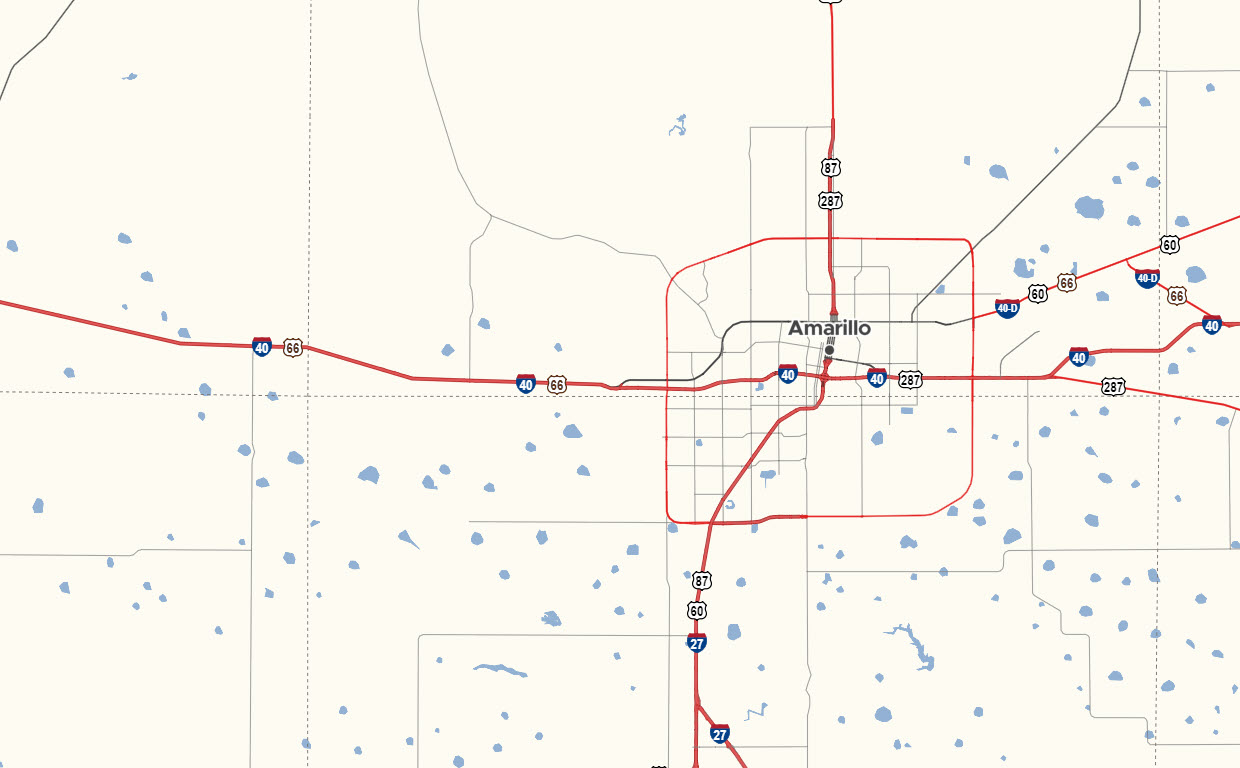 This map style above, OSM Americana by Brian Sperlongano, shows both the new designation I40 and the historic Route 66 in the labeling.

In OpenMapTiles 3.13, a new attribute to the transportation_name layer has been added to serve just the junction nodes for motorways, allowing them to be styled differently than the junctions on other roads. These junctions are the most important so being able to style them independently means that they stand out and override other features on the map if necessary. 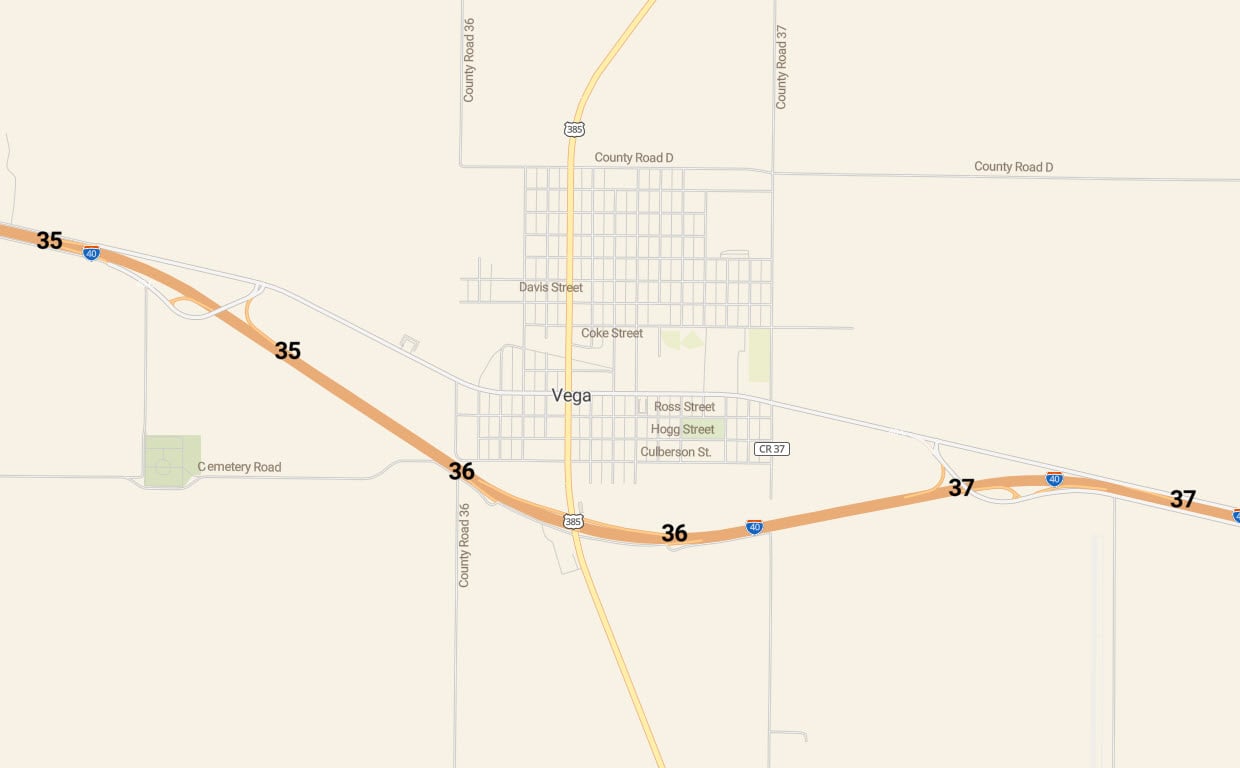 Junction numbers are highlighted in bold on this map, with both east and westbound locations for each one.

As well as these new ways of representing roads, there is new data in version 3.13.

Firstly, sticking with the transport theme, you can now label shipways such as ferry routes on your maps. 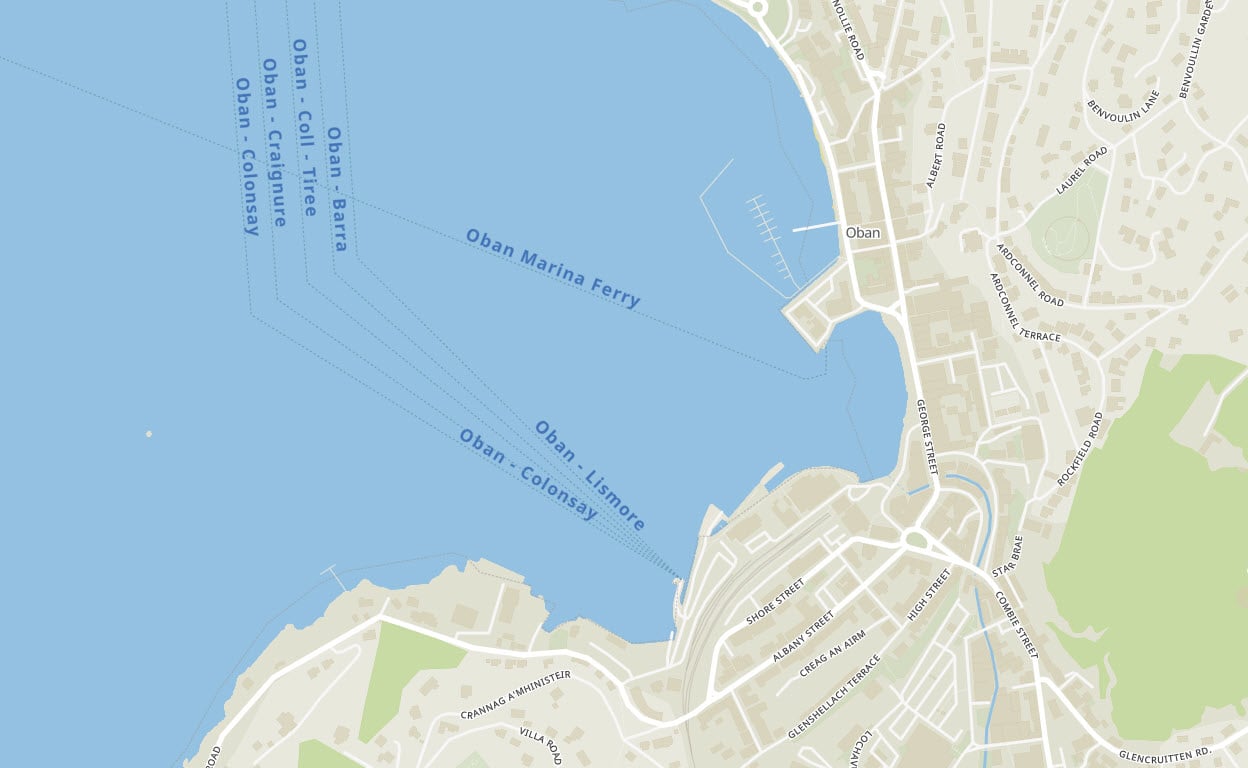 Like the ferries, you can now see labeled cable cars on the maps. These labels are helpful for winter sports and general transportation in mountainous regions like the Alps.

Staying in the mountains, the customary_ft tag has been added into the mountain_peak layer. This addition means you can now label the height of the peaks in feet instead of meters (in the USA). When it comes to labeling mountains, you can do one of the following: 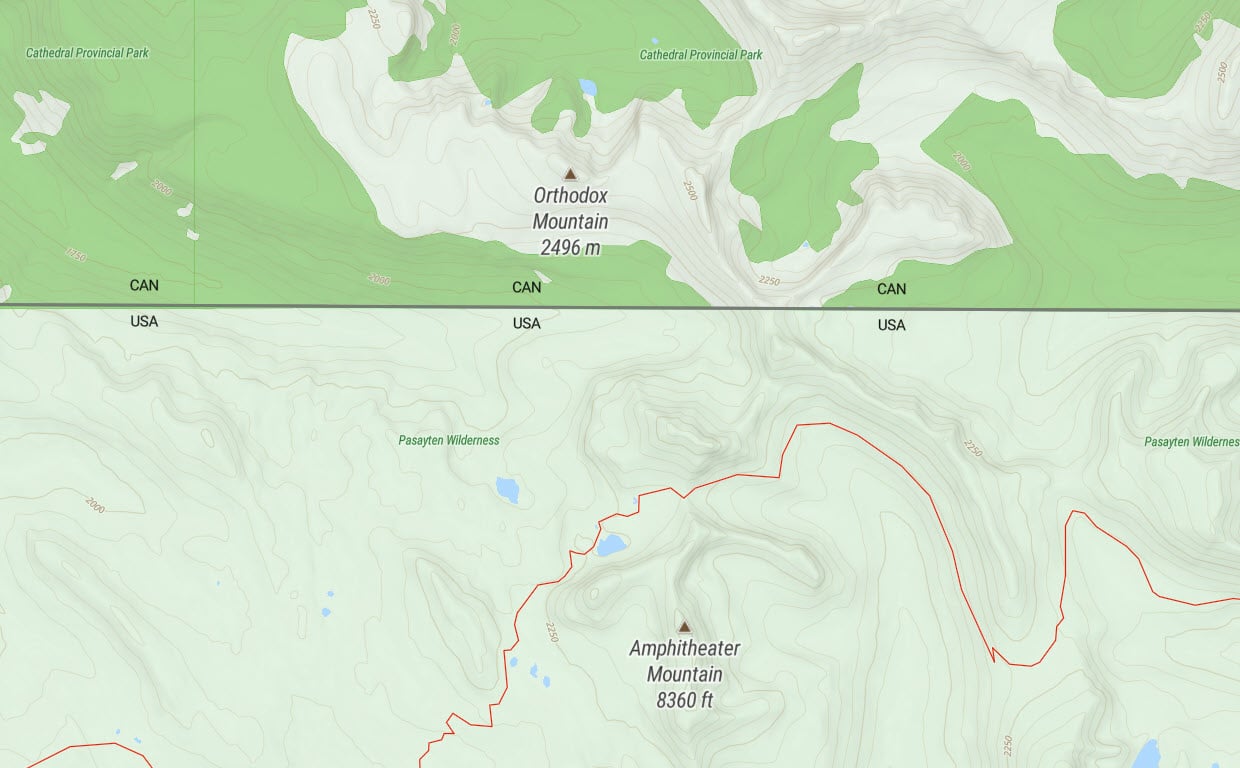 The mountain_peak layer has had a few more additions to help maps show other mountain top features. We added line objects like cliffs, aretes, and ridges to help define mountains better but kept the name mountain_peak to preserve compatibility with previous versions of the dataset. 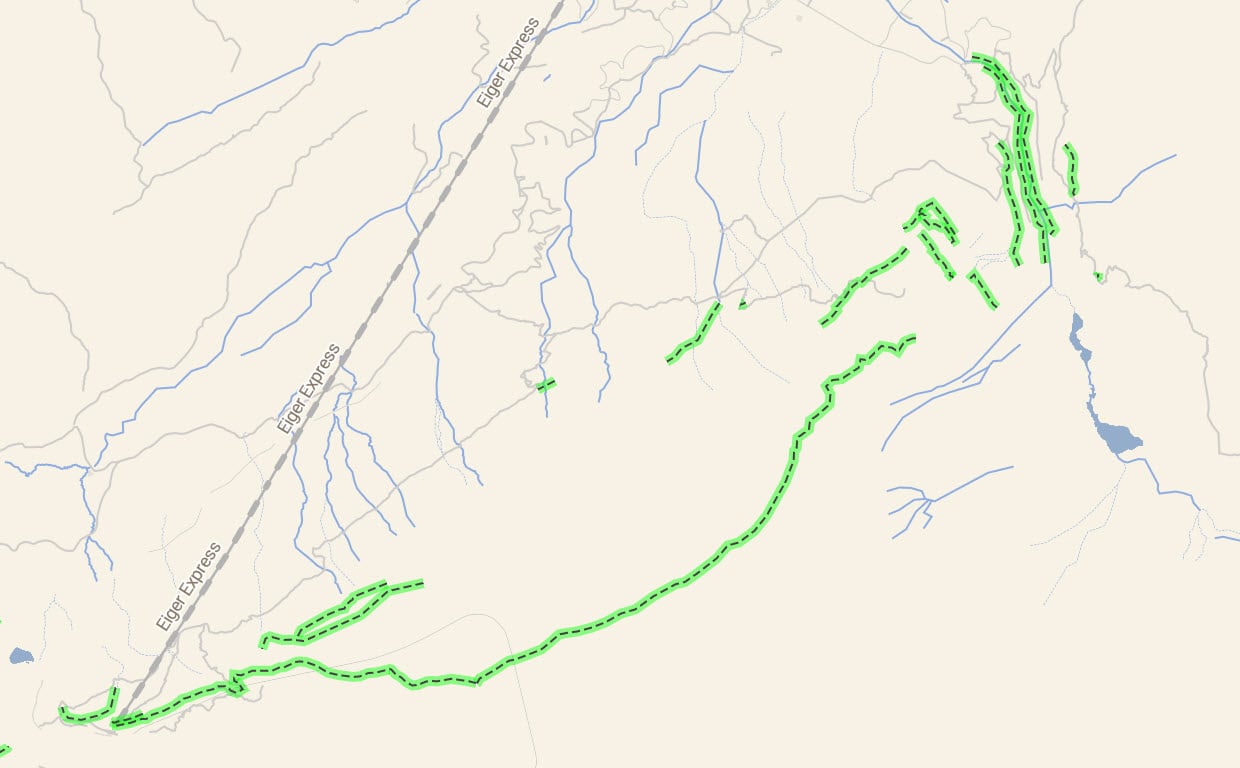 The dotted lines highlighted in green show the lines of cliff edges, aretes, and ridges in the mountains. 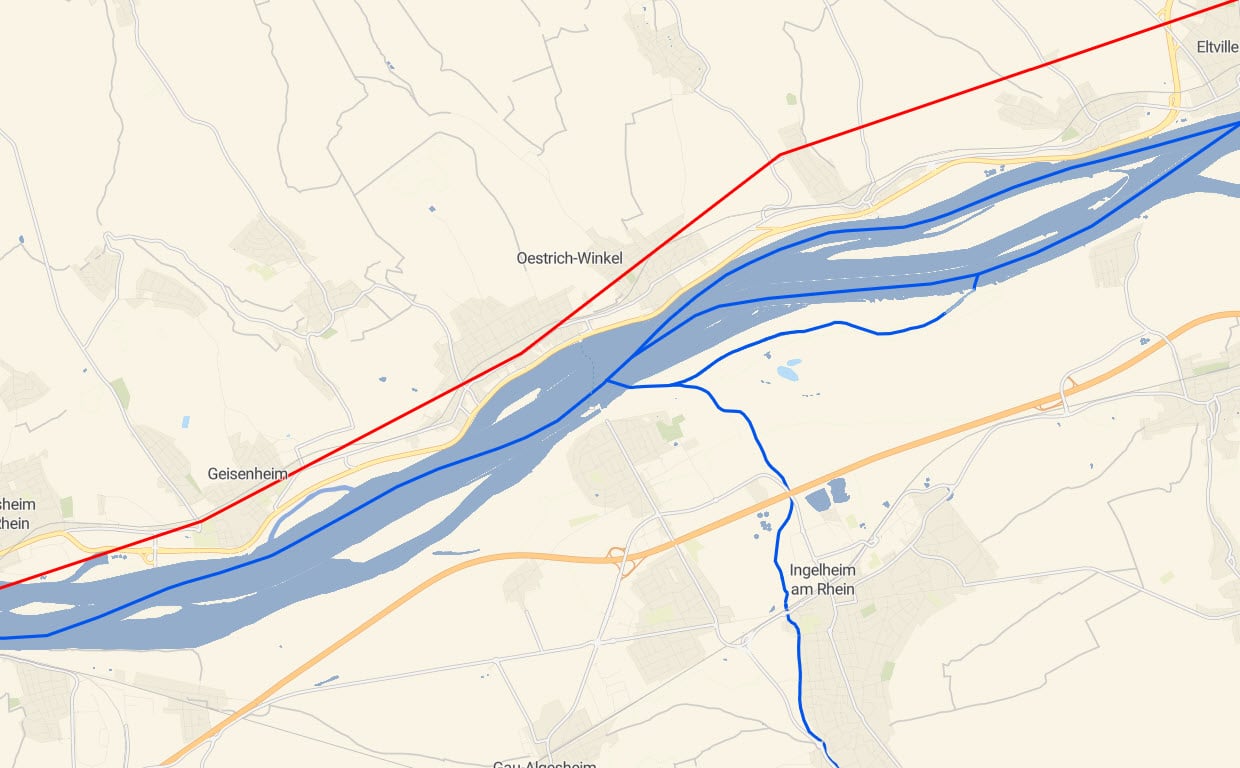 The new, more precise, waterways from OpenStreetMap are shown in dark blue with the previous Natural Earth ones shown in Red. You can see how they now stay within the river areas.

Along with all the work to bring you new features and classes, we have been working on changing the zoom levels that certain layers appear on. These changes are made to help you create brilliant maps that have the information you need without being overloaded. 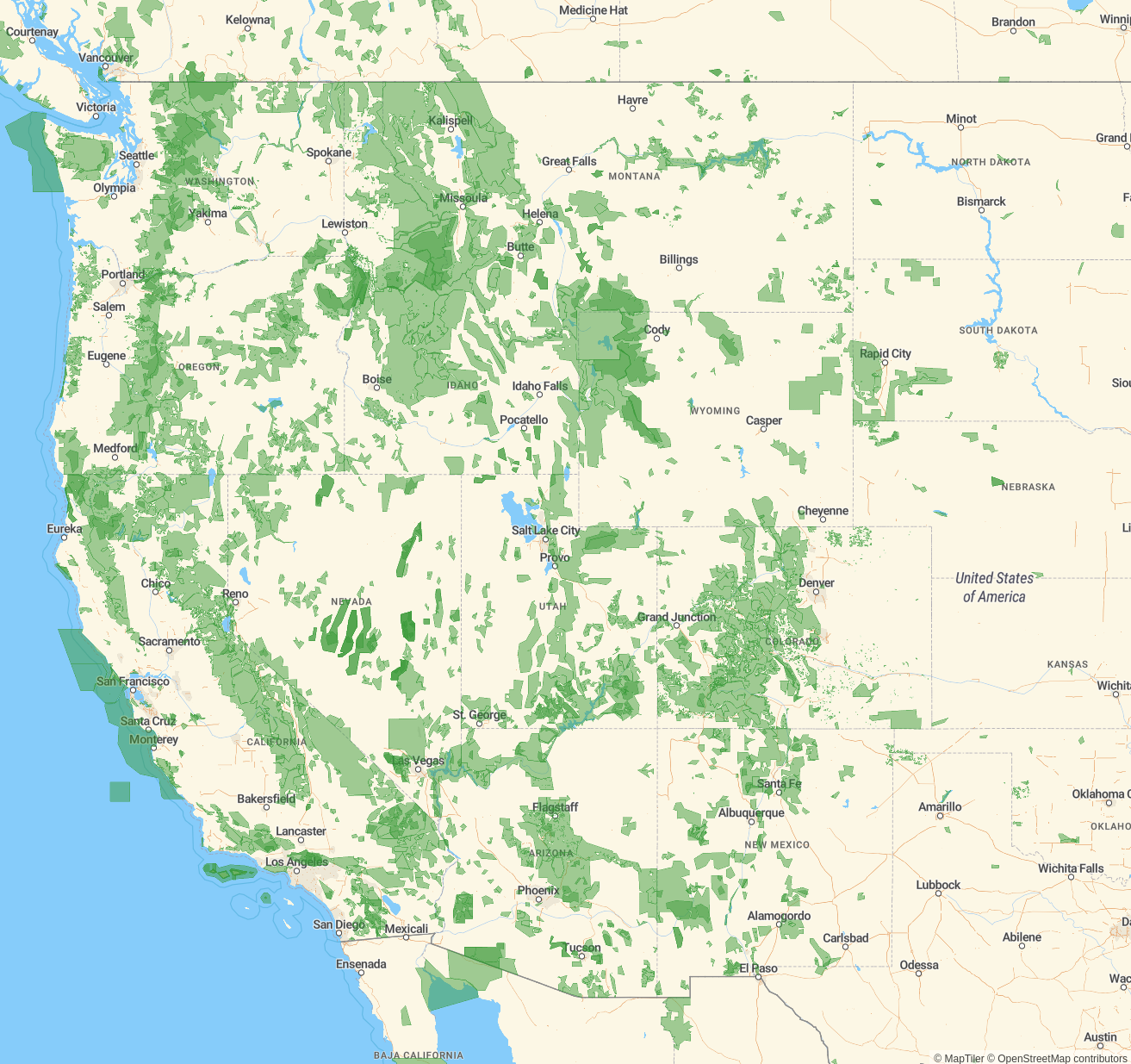 Green park land can now be seen on maps showing much larger areas.

International airports are now visible from zoom level 8 instead of zoom level 10, so these can now appear on maps of much larger areas.

There are a lot of new labeling points with class values of state or province, which can be used from zoom level 2 to 5 (depending on density) up to zoom 14. These new labels could only be added after their relevant borders were also added to the same zoom levels as well.

The OpenMapTiles 3.13 update has also included a lot of effort to ensure you get the best data in a timely fashion by implementing tests and streamlining our procedures.

In a move to make the importing of borders data more straightforward, we now import them with Imposm 3. This has removed one of the steps we need to go through to get the data, simplifying the process.

Version 3.13 also brings much more quality control with several new testing regimes being implemented. The import process now checks all the tables are in place before beginning, integrity checks are performed on updates to ensure they won’t break existing data before it is added.

Finally, unit tests are performed afterward to make sure nothing has broken throughout the process. There have also been improvements in how errors are reported, so it is easier to find out what went wrong if an error occurs.

Overall, the data in OpenMapTiles 3.13 is much more stable and reliable than ever before. With the new additions and changes to zoom levels, you can now use OpenMapTiles to make advanced route maps and much more detailed, beautiful-looking maps.

Remember, you can use map hosting from the authors of this open-source project to serve both raster and vector tiles. Through MapTiler cloud you can design a custom map style fitting your app with a few clicks, and MapTiler has the lowest hosting costs, cheaper than maintaining your own map servers.